How Much Higher Can Prices Go?

In this blog post I am taking a look at Cambridge real estate price trends for the period 1996 – 2015. In my next post I will talk about the same information for Somerville.

A few of my buyers have told me that the Cambridge market is crazy, saying that there are too many people chasing too few properties pushing prices higher and higher. Buyers are pushing prices up and sellers are headed to the bank. These buyers are staying out of the local real estate market until prices go down. They are trying to time the market in the hopes of hitting a downdraft and getting a great deal. It has always been my belief that Cambridge real estate rarely goes down and when it does the price drop is insignificant, short lived and only flattens for a while and then starts going back up. This was an opinion and I had never really looked at the data. So I decided to take a look at the price trend for single families and condominiums for the period 1996 to 2015 and see what happened.

While the big picture is that prices just keep going up and up there was a period when prices flattened out and even went down a bit. Between 2005 and 2011 prices for single families and condos were relatively flat. Here are the numbers: 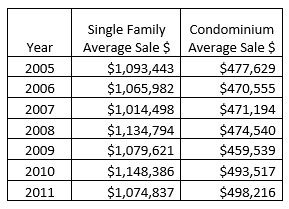 Next are two graphs that track the average prices for single families and condos for the period 1996 to 2015. While there was some flattening in prices between 2005 and 2011 by 2012 the steady year over year price increases continued.  The first graph is for single families followed by condominiums. 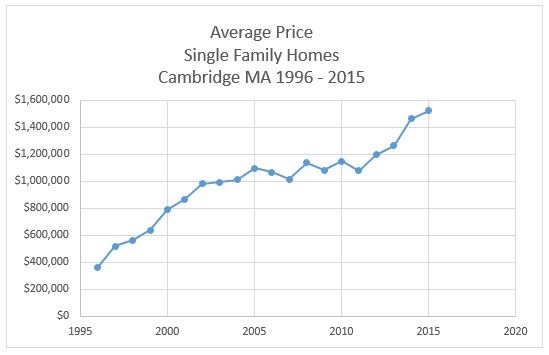 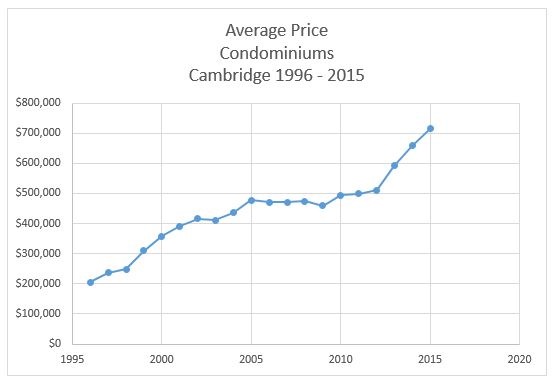 Will this trend of escalating prices continue unabated or is this a local bubble that will pop one day? I am a Realtor not a fortune teller so I do not know. There are lots of things in the world that can affect the price of real estate – elections, interest rates, the stock market. Some say that Brexit pushed U.S. home prices higher. For the first six months of 2016 the upward trend continued.  The average price for a single family in 2015 was $1,518,970 and by the end of June it was $1,829,012. The average price for condos is also up from the 2015 average of $714,819 to $868,391 for the first six months of 2016.

What is the take away?  From looking at this data I believe that prices will continue to increase for the remainder of 2016. I do not think that prices in Cambridge will go down though there may be some slowing of the price increases and that is about it.

I really do hate to feed into some of the feeding frenzy but if you want to buy in Cambridge I suggest sooner not latter.

All data from Multiple Listing Service.